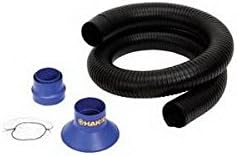 Round nozzle For absorbing smoke from above. Includes 4' articulated hose, adapter and round nozzle.